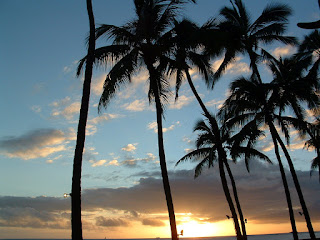 We will only consider guest posts queries that are submitted by individuals who have been subscribers or followers of TravelnWrite for six months prior to the date of the query.

Both subscription and follower information is found on the front page of the blog.

The Small Print: We are not interested in promoting products,services or other commercial interests. Please no commercial post-for-link offers. As a non-profit, we do not pay for posts. 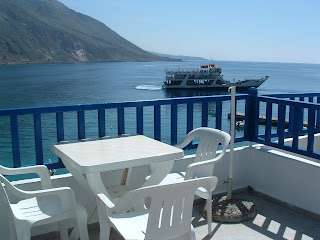 August 26, 2012 ~Our first guest post is written by a friend, fellow traveler and follower of the blog.  Many of you will recognize the name Bill Kitson  from his murder mystery series that's created the police investigator-murder-solver Mike Nash.  Others of you may have read his Watering the Olives and Requiem e-books (all are available from Amazon.com and are on the carousel on our TravelnWrite home page).  We met Bill and his in-house editor/wife, Val, when we all were in Loutro the small town on Crete's southern shore.  They've just returned and send this report:

I have to admit that in the weeks and months leading to our annual holiday on the beautiful island of Crete, I had some quite serious misgivings. Having read and heard so much about the fragile state of the Greek economy, how would our friends, the people of the village that has become our second home be bearing up in the face of the financial apocalypse that is threatening to engulf the Greek nation?

I ought to have known better. I should have realized my fears would be groundless. Loutro, the tiny village where we stay, is in the Sfakia region of Crete. The island has been invaded countless times, from amongst others, the Romans, Venetians, Turks and most recently German forces during WW2. Invaded, but never conquered. Such is the wildness of the terrain and the indomitable spirit of the Sfakiot people that all attempts to subjugate them have ended in failure.

To these proud people, a small matter such as the financial upheaval in Athens would hardly cause their collective pulse to flutter. So it proved after we arrived. At first glance, it seemed that all was exactly as it had been last year, and the year before. On closer inspection we noticed that there were two new boats for rent, a new beach bar has been erected, and extra sun loungers provided for the tourists. Since last year, when there was only an internet cafe, almost all the tavernas have had free wi-fi installed. These are hardly the signs of your average crisis.

As days passed with the sun beaming down from a cloudless sky and the reflection on the water turning from blue to white (a sure sign of heat to come, so the locals say), I realized that all I’d read and heard hadn’t had the slightest effect on our second family. The locals were right, by the way, to the tune of 37° – that is hot, even for those used to this climate.

Naturally, I was delighted, but I also began to wonder why this was so. Was it because of the unconquerable courage of the Cretans? Or had the crisis been exaggerated out of all proportions? The answer could possibly lie with both of those – or neither. It might just add weight to something I have suspected for some time – that whatever impressive speeches politicians make, whatever triumph or tragedy they forecast, their policies, decisions and oratory have, at most, only an extremely marginal effect on ordinary people; the way they live and, the way they work.

Whatever the perceived disasters may await the Greek economy, here in Crete, visitors will continue to be greeted with the same wonderful hospitality that has become a legend worldwide. Of course the Greek nation has severe financial problems. But that shouldn’t deter people from visiting this beautiful country. Quite the opposite, for in coming here, in spending money in the hotels, restaurants, tavernas and shops, you can provide more practical help to ease those troubles than all the politicians’ pontificating – and have yourselves a really great time doing so.