The mist descended like a shroud over the old historic square, softening shadows and silhouettes cast from streetlights. We pulled our wraps a bit tighter and picked up our pace as we crossed Piazza Maggiore on that late November evening. It was rather empty and somewhat eerie; definitely atmospheric as we made our way to dinner.

Just a couple hours later, under clear skies, we sipped wine at a table to the side of the square. A fickle Italian winter's night, to be sure.

Looking back, we think early winter was a perfect time to visit because there were fewer tourists, easy access to restaurants, historic and cultural exhibits and hotel reservations were easy to obtain.

As it turns out we also completed the trip just before Omicron, the new Covid variant, caused a tightening of travel restrictions in December.  Now just keeping track of the near-constantly changing rules for entry into countries has kept us homebound in Greece.
I chose to call it an  'Italian Escapade' because escapade refers to something daring and adventurous, which in many people's minds is any act of travel in this 'Time of Covid'. (I can assure you it was in reality neither daring nor adventurous - it was delightful.)

Our 10-day escapade began in Bologna, considered the culinary capital of Italy. We had a night in Verona and spent the remainder of our visit in Venice.

Bologna, a city of just under 400,000, is the capital and largest city in the Emilia-Romagna region. Parmesan cheese, Parma ham and balsamic vinegar are among the specialties from here.

We gave ourselves three days in which to taste and tour this once-walled Medieval city that boasts the longest continuously operating university in the world. The University of Bologna opened in 1088.  We could have stayed twice as long and still not seen and tasted all that this city has to offer. Our first morning's tour aboard a Hop-On, Hop-Off double-decker bus convinced us we'd never get to all the places we'd like to have spent more time. 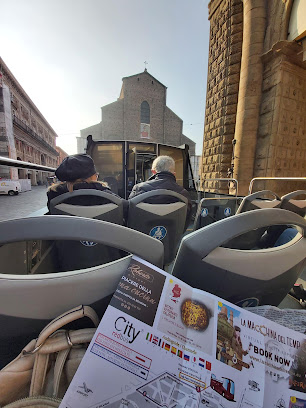 The Scout is to be credited with picking a hotel that put us in a perfect location, footsteps from Piazzas Neptune and Maggiore.  A hotel that was not only luxurious but also one with a bit of the remains of a Roman road running through its lower level.  Breakfast was served in a dining room at that level and gave us a chance to view a bit of Roman history up-close and personal.

Breakfast was included in the room rate - which is often the case in European hotels. This was a feast served in an elegant dining room. So much food that we didn't need to eat lunch.

Note I said, didn't need to eat lunch but sometimes in this foodie town, one couldn't resist eating lunch. Even the tuna sandwich stacked with thick slides of cheese, tomatoes and lettuce, from a sidewalk cafe was a gourmet feast!

I was researching a magazine article about Bologna with a food focus, so we quite often found ourselves in delightful markets that offered some of the most tempting selections.

And we sampled local wine, Sangiovese, and red blends from the Emilia-Romagna region. My favorite was a Pignoletto, a white wine from the area that came with just the slightest bit of bubbles.

The city, although considered the nation's culinary capital, is equally famous for its Medieval towers and porticos, the latter just recently nominated for UNESCO Heritage status. We love those ancient towers (after all, we live in The Mani region of Greece, also known for its towers.) In Bologna more than 100 towers once made up the cityscape; now just two dozen are left.

One can't miss the town's two most famous, the Due Torre (Two Towers). The tallest, Asinelle at 97.2 meters, is open to the public and a climb of just under 500 steps gets you to the top. We passed on that. The shorter, Garisenda, is under renovation and is closed.

We were so enjoying Bologna that we considered extending our stay and skipping Verona, but then we'd never been to Verona, so we packed our bags and headed to the train station for what turned out to be a great introduction to a city we hope to return to one day. It will be the topic of the next post. 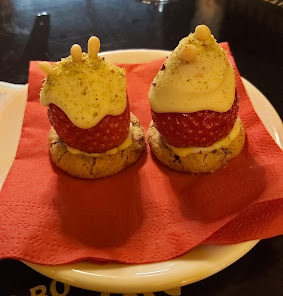 Before signing off, I must tell you that two of the smallest things made for the biggest culinary memory of Bologna. One evening I was looking for 'just a little sweet' as I told the waiter. He didn't hesitate and within minutes of my request we were presented with these two white chocolate topped strawberries each sitting on a tiny chocolate chip cookie.
As always, our thanks as always for the time you spent with us today. Safe travels to you and yours!
Through My Lens
Travel Tuesday
Our World Tuesday
My Corner of the World Wednesday
Wordless Wednesday
Friendship Friday Blog Hop
Posted by Jackie and Joel Smith at 7:23 AM