“Life offers you a thousand chances... all you have to do is take one.”
– Frances Mayes

Nestled into the edge of our small olive grove on a hillside in Greece’s Peloponnese, the Stone House on the Hill -- that captured our hearts and imaginations three years ago --  has drawn us back again in our annual autumn pilgrimage.

This time it is different. We are no longer tourists marking our calendar with the 90-day deadline for leaving this Schengen Country. We are residents who are settling in for awhile.

We are home in Greece.

The journey between Seattle in America’s Pacific Northwest and this hillside haven in the region known as The Mani is a hefty one. The flight to Europe takes about 10 hours no matter which gateway city – London, Paris, Amsterdam, Munich –  you choose as a connecting point for a flight to Athens. (There are no direct flights between Seattle and Athens.)

Thanks to time zone changes, you arrive the next day whether you leave Seattle in the afternoon or evening. Then, the flight to Athens adds another four hours to the journey. From there a car or bus ride completes the journey another 3 – 4 hours.

As those who’ve been with us for awhile know, our journey to residency took a bit longer. It was September 2016 that we took the first steps towards becoming full-time ex pats and finally in June concluded that journey.  But all that is history! The bags are unpacked. We are settling in.
We are ready to see what direction the next year might take us!

“I had the urge to examine my life in another culture and move beyond what I knew.”
– Frances Mayes

Moving into The Stone House on the Hill mindset 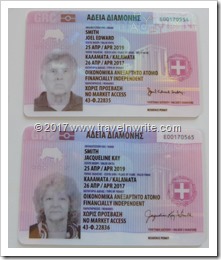 Last week we checked off the last of our Pacific Northwest ‘to do’ list for pausing our lives there. Once aboard the plane we refocused on our ‘to do’ list  here.

I realized that while I told you last spring (probably more than you ever wanted to know) about the time spent obtaining resident visas, I never got around to telling you about what was going on at the house.

Now we are ready to start some new projects and finish off those we started a few months ago.


With the idea in the back of our minds that this might be a full time home for us (for long before I mentioned it to you all), we tackled some projects to warm up our rather stark stone house.


Starting at the Top

We’ve always been taken with the wood ceilings of Greek houses. Problem was ours came with a concrete ceiling that gave an industrial factory or hospital-like feel to the place. Painting it a light blue, softened its impact but still it felt factory-like. If we were going to be here for awhile, it was time for change.

We chose a traditional Greek style from yesteryear for our new wooden ceiling. Back in the old days, our carpenters told us, they didn’t have the machines to make the wood slats interlocking so they were joined by a narrow strip of wood.

We were taken with that old look and were thrilled at how the change warmed up the interior. We’ll be finishing them off with a varnish or paint wash this fall – we ran out of time in the spring.

As luck would have it, the talented father-son duo, Ilias and Dimitri, who installed our ceilings are also our neighbors. They live, and have an enormous carpentry shop, at the foot of ‘our’ hill in the village of Agios Dimitrios (St. Dimitri). Young Dimitri speaks English so I also explained a storage dilemma I had in the kitchen. He scratched his shaved head, flashed a big grin and a week later he and his dad solved my problem with a piece they’d created in that workshop of theirs.

We also finished the project undertaken last fall when we re-did the main floor bathroom (at the top of the red stairs).  We’d not liked it from the get-go but we’d been unable to find a tile shop in the big city of Kalamata, an hour north of us.

We knew there must be a glut of such shops, but the few we happened upon offered small dust covered displays, and the proprietor – usually elderly – only spoke Greek.  We’d wait while he summoned a son, daughter, friend, nearby shopkeeper to come and translate for us and then learn that the style we liked was no longer being made. (That begs the question, “why was it still in the showroom?’, but I digress.  . .)

I can’t tell you the hours spent searching for ‘a tile shop’.

Finally we found a store! And these are big-deal, high-five-hand-slapping accomplishments for ex pats!

It is a magnificent store where English was spoken, and that sells an amazing array of Spanish made tiles. We’d driven past it on numerous occasions but there was nothing in its name to tell us they sold tile (friends finally directed us there).  The staff helped us find an installer - the bathroom got its much-needed make-over last fall. We finished off the moldings and ceiling work ourselves this spring. The old is on the left and our new look on the right below:


That Mediterranean Garden of Ours

One can never have too many plants in a Mediterranean garden, we’ve decided. So our garden keeps growing, make that enlarging, as I am not sure about the growing part. Our plans are to create a new ‘garden in the grove’ where flowers and vegetables will live happily ever after. Consider the photo below the ‘before’ photo. Fingers crossed, it will look vastly different after a few continuous months of effort. That little border strip already contains hibiscus, calla lilly, lavender, lantana, plumbago, geranium and daisies  – they are all there in the photo – just too small to see. And I should tell you we found the summer's drought and heat took a heavy toll on this project -- we are back to square one.

One of the head-shaking parts of travel for us, is discovering the similarities in the world’s gardens. We are not sure whether we need to thank those early day explorers or Mother Nature for intermixing the worlds’ flora.

Those plants I’ve named above could just as easily been part of my Pacific Northwest garden. I brought lavender, dafne, and iris starts with me from Kirkland this fall to add to the iris growing in the garden here. Last spring I  brought those plumeria (frangipani, as it is known in many places), starts from Hawaii.

Roses, geraniums, chrysanthemums, and anthurium are among plants that flourish here.


“Although I am a person who expected to be rooted in one spot forever, as it has turned out I love having the memories of living in many places.”
– Frances Mayes

You travel enthusiasts out there, take note: don’t let all this ‘home projects talk’ make you think we are daft enough to have given up our travel ambitions.  Just the opposite!

Part of the selling point of living on this side of the sea was to shorten flying time and to make travel more affordable and easy to accomplish.

In four hours we can fly from Athens to London and in just over two to Rome, Italy.  We can be in Cairo  in under two hours and Dubai, in just about seven. With the proliferation of low-cost carriers in Europe, such flights cost little.

The number of airlines and flight frequency is steadily increasing at the Kalamata airport, only an hour’s drive from us.

And there’s still so much of Greece waiting to be discovered as well.   I can assure you that the travel tales will be continuing as well as the stories of adapting to ex pat life.

“Any arbitrary turning along the way and I would be elsewhere; I would be different.”
-- Frances Mayes

The quotes in this post are all from Frances Mayes, whose 1996 memoir “Under the Tuscan Sun” first sparked the possibility of ex pat life in Europe and a subsequent book “A Year in The World” further fueled the idea.

Those of you toying with the idea of ex pat life – and many of you have said you are – as well as armchair travelers would find both enjoyable reads.
As always, we thank you for the time you spend with us and look forward to welcoming you back again next week.  Your comments and emails are treasures.

Safe and happy travels to you and yours~

“Where you are is who you are. The further inside you the place moves, the more your identity is intertwined with it. Never casual, the choice of place is the choice of something you crave.”
--- Frances Mayes