Living Differently ~ A Matter of Time and Lifestyle

We’ve got all the time in the world.
-- The Scout

That concept of ‘all the time in the world’ is how we’ve approached travel - and life - in these commitment-free days of ‘boomer-hood’.  Not tethered to a job. No children thus, no grandkids. No other family commitments. No pets.  No ties.

We realized some time ago that we aren’t ‘empty-nesters’ - we seem almost to be ‘no nesters'. And with that realization, our travels became more frequent and the destinations further away. We stayed in distant places longer wanting to experience more of ‘that life’.

But even die-hard travelers like us enjoy the comforts of a home so we purchased a few weeks at timeshare homes in Arizona and Hawaii and then added our Stone House on the Hill in the Greek Peloponnese. Such a variety locations has us living a part of each year in a high rise condominium tower overlooking the Pacific Ocean and a low-rise southwestern adobe-style condominium with a desert view; a home in an olive grove outside a rural Greek village and a single family home metropolitan suburban Seattle.

Seize the day, then let it go.
-- Marty Rubin

This new lifestyle really began when we gave ourselves permission to live in more than one place in the world on a rotating basis. One of my fellow bloggers calls their similar lifestyle one of 'location independence'. While we sing the praises of it, many of our long-time friends and family (who are deeply rooted in the Pacific Northwest) still wonder what could possibly be so wonderful about being someplace else all the time.

The timeshare life didn’t strike many as too unusual, as we were still traveling in America, with the exception of a few ‘time’ trades to foreign destinations. Many who knew us during our 40’s cheered on our home ownership, in a village north of Puerto Vallarta,  Mexico. They saw it as a great adventure – and a relatively ‘safe’ one as we were still employed full-time in the Northwest and spent only a few weeks – our allotted vacation time - south of the border.

But when in our retirement years we bought a home in Greece, eyebrows went up, and the questions began. Many, I think, suspected signs of possible early senility in each of us. After all, we are old now, it is time to be fretting over Medicare and Social Security benefits and various ailments; not to take leave of our senses and start growing olives in Greece.  What were we thinking?

We are only but guests at Time's tea party.
~Terri Guillemets

We aren’t alone in being 'different'

Living differently is what draws armchair travelers and daydream believers, like us, to books written by famous ex pats - Ernest Hemingway, Gertrude Stein, Julia Child, Frances Mayes and Peter Mayle, among them. Each has entertained, amused and inspired us (and like-minded readers) with their tales of living abroad.

What I’ve found interesting in researching this post is the vast number of unknown (unpublished) Americans who’ve chosen to live on foreign soil. We are but two among millions,. . . yes, millions!


The State Department's most recent figure (January 2013) of U.S. citizens living overseas (which is the source of other organizations' estimates such as the Association of Americans Resident Overseas [AARO]) stands at 6.8 million, up from 6.3 million in July 2012.

And those figures reflect only those Americans who’ve registered with their Embassy in the country in which they are living. The report speculates that real numbers are likely much higher.

In our tiny slice of Greece there are some two dozen Americans who’ve chosen to live full- or at least half-time there.

Recognize life is (too) short

Back to that, “All the time in the world” quote.  In reality we know that at our ‘boomer’ ages we don’t have all the time in the world. The day will come when our ability to live in different parts of the world will be limited by physical or mental constraints: in other words, we really will be too old!   So we’ve decided not to put off until tomorrow what we can experience today.

‘But don’t you miss. . .when you aren’t here?’( Fill in the blank with a favorite food, place, or event.) And the answer is ‘Of course!’  I miss my Pacific Northwest peanut butter and Starbucks coffee when in Greece ( Imported peanut butter is expensive and the closest Starbucks is in Athens). I miss frozen Mai Tai’s when we leave our timeshare in Hawaii.  I miss the stately Saguaro cactus in Arizona. And it goes without saying that I miss ‘my’ cats when we exit Greece.

Note: I didn’t mention friends and family in the above paragraph because we don’t really – thanks to modern-day technology – leave any of them behind.  We could literally see each other and visit daily thanks to the advent of Facebook Messenger, Skype, and Face Time. 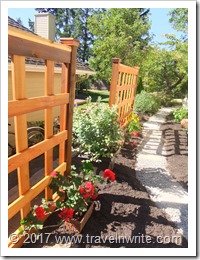 For the next few months we are in our Pacific Northwest home, our anchor residence for the last 30 years.  We’ve been back less than a week and already have fallen  into the routines of every day life in this Seattle suburb. It’s as if we’ve never been gone. But then we say that about settling into each of our lifestyles these days.

One distinction this home has over our others is that it holds the lifetime of ‘stuff’ we’ve collected (or inherited) over the decades. Many items with only sentimental value . . . that collect dust in our absence.

With a goal of freeing ourselves from these material ties that bind, our summer travels will likely be to local charities and dump sites.


I'm certain those of you of 'boomer age' see the irony in how we all worked to acquire so many things that fill drawers, cupboards, closets and the garage during the first half of our lives and now we are tasked with getting rid of it.

The nice thing about our Stone House on the Hill is that it lacks storage space – few drawers and shelves,  armoires instead of closets and no garage. And you know what? We love the lack of ‘stuff’ there!

While we are doing those rather mundane tasks of sorting and hauling, I plan to escape every week with a look back at Greece, Geneva, and France. One thing we are already missing about Greece, is the food. I'll be focused on that next week!

Hope your summer travels – or projects – are good ones. Stay safe and healthy! And as always, thanks so very much for being with us ~

Posted by Jackie and Joel Smith at 8:45 AM