We set off this week on our Greek Adventure; traveling on the ‘road to residency’. First stop: San Francisco, California to meet with the Greek Consulate serving this region of the United States.

What prompted this journey through American and Greek bureaucracy is the constraint of doing the ‘Schengen Shuffle’ (90-days-in Greece and  90-days out, per the Schengen Treaty zone agreement). We want greater flexibility in the time we spend at our Stone House on the Hill and the only way to do that is to become a resident-card-carrying person. The card, to which we refer, is the Greek equivalent to a ‘green card’ as it is called in the U.S.

The residency application process for Americans has two parts.  The first must be completed while still in the U.S.  So Monday we headed to San Francisco for a Tuesday morning meeting with the Greek consulate. The session was part interview and part a review of our documents which (we hoped) showed that we met Greek thresholds for income, health, medical coverage and repatriation.

At just over 24-hours our trip to the ‘City by the Bay’ may have been one of our shortest on record. Northern California has been drenched with rain storms in recent weeks. Hotel prices were breathtakingly expensive, ($300 and above in the city’s center where we needed to be). So we weren’t inclined to stay any longer than necessary. We’d decided to make the most of our few free hours there and celebrate The Scout’s recent birthday in this city where crooner Tony Bennett left his heart. . .

In hopes of finding a reasonably priced room, The Scout turned to Hotwire.com, the internet site on which you book a hotel by its star-rating, price and location, then find out its name after you’ve hit the purchase button. He chose Nob Hill as it was about a mile from the Consulate’s Office; walking distance, if you are up for hill climbing.

We were delighted to find we’d be at The Scarlett Huntington, originally built back in 1924 as an apartment house but long ago converted to a hotel. It was shut down a couple years ago for  a $15 million renovation.  While room rates begin at the $350 range, our Hotwire prices was $175 plus taxes and fees. They upgraded us at check-in to a high floor with a room that overlooked the Episcopal Church’s Grace Cathedral.

A great, reasonably priced room and not a cloud in the sky.  It couldn’t get any better . . .but then it did.  We began the birthday celebration with a half block walk to the towering Mark Hopkin’s Hotel and headed to their lounge, aptly named for its location, the Top of the Mark for a glass of wine and a birthday toast.

What unbeatable views we had. . .

From the sweeping city skyline and bay, to a view overlooking Nob Hill and Grace Cathedral. . .so many views in any direction. (For those wondering, our glasses of wine were $12, about what we pay when we go out in Kirkland these days – with no views like these.) 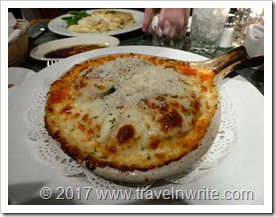 Then we headed a block beyond that park pictured above and returned to one of our favorite San Francisco eateries.

We found the tiny Nob Hill Cafe, 1152 Taylor Street, is as wildly popular as we remember it being decades ago.

We got there just before 6 p.m. without reservations and lucked out getting a table. When we left an hour and a half later the restaurant was full and foodie fans stood in clusters on the sidewalk waiting for their chance to get inside the small Italian restaurant.

Tuesday Morning: Back to Business

The Consulate’s office is in a residential area of historic homes and tree-lined streets, not far from Pacific Heights and Nob Hill.  The neighborhood’s architecture was postcard perfect:

We were early for our appointment so we strolled for a few blocks soaking in the beauty of the area and speculating on the history of its many building styles. Who had occupied them? What was the narrative they could tell?

To Get or Not To Get ~ The Entry Visa

The time had come. Our journey would continue or stop inside this lovely old building which was painted blue and white, the colors of Greece. 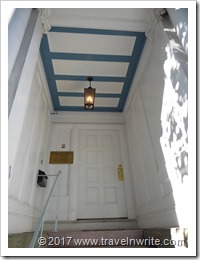 Dimitri, the consulate with whom we were meeting and who’s name has been a household word for a year now – greeted us warmly. We spoke of the Peloponnese, our shared love of Greece, olive harvests, olive oil, fishing and villages. It was an enjoyable start to the meeting.

Then we got down to business.  We were applying as individuals, so our documents were identical, but had to be presented as though we were on our own.

I went first presenting and explaining each of the documents. It took an hour. 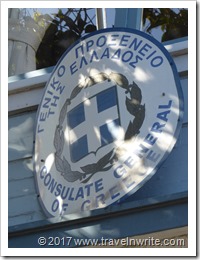 It wasn’t a slam dunk.


The insurance letter wasn’t written to specific categories of coverage as defined by the Greek entry requirements. ‘The insurance company wouldn’t write it that way. But it says the same thing,’ I explained.  He sighed.  The FBI fingerprint check, was deemed somewhat dated, it was three months old, dated last November. . . My doctor hadn’t used the correct stamp on the medical form. . .

Dimitri left the room to enter our information into the system. We sighed.

We paid the non-refundable application fee ($390 for both of us). He collected our passports and self-addressed, stamped envelopes so they could be returned once the application process was complete – two or three days, most likely.

Then Dimitri said we were approved. Done. No fanfare. Just step one completed.

Now the clock starts running. We have a year in which to obtain the residency permit. This visa is a one-time-shot. He made it clear he wouldn't issue a second one.

Then our conversation turned back to Greece.
We told Dimitri to come for coffee the next time he’s in The Mani.

~~~~~~
Back at the hotel an hour later, our mobile phone rang. It was Dimitri. Our passports could be picked up. . .the visas were attached. . .with visa photos as flattering as those in the front of the passport – no mistaking us!


So our road trip to residency journey continues. It requires one more trip and a bit more bureaucracy before we leave for Greece. Hopefully you can join us on that journey next week. Thanks again for sticking with us on this rather long and winding road.


We can’t end this segment without sending a big, make that HUGE thank you to all of you who sent us good luck messages both in the comments, on Facebook and via email after reading last week’s post about heading out on this journey.  It is a humbling process and your words were just the confidence builder we needed.  If you missed last week’s post, you can find it here.

Safe and happy travels to you all.

Linking up this week:
Through My Lens
Our World Tuesday
Wordless Wednesday
Travel Photo Thursday
Photo Friday
Weekend Travel Inspiration
Posted by Jackie and Joel Smith at 9:22 AM