It wasn’t a question of whether we would visit Cairo, Egypt as it’s been on our bucket list for a long time.

It was simply a question of when. A question that surfaced more frequently after our cruise through the Middle East last spring gave us a appetizer-sized introduction of Egypt. That two-day snapshot whetted our appetites for a larger serving of this amazing country tucked into the northeast corner of the African continent.

Your responses back in November to the news of our return to Egypt; specifically, Cairo, were a mixed bag: a surprising number told us of your own recent travels there and offered suggestions of things to do, places to see ~ others sent well-wishes to be safe.

As we booked the trip, I have to admit that visions of Pyramids and Antiquities competed with scenes of Tahrir Square during the 2011 Egyption Arab Spring revolution and the October 2015 Russian plane crash in Egypt’s Sinai – its cause, perhaps the result of an act of terrorism.

So, we could have kept Cairo on our ‘someday’ list. . .but in reality, when intrepid travelers reach their 60’s – even with good health and can-do  attitudes like us – they have to be honest with themselves. In our case that included asking: ‘How much longer do you wait to do those things you’ve always had on the bucket list? How long will you be able to climb those pyramids?’

And waiting until a destination is ‘safe’ these days, well, . . sadly, as daily headlines remind us, may be a very unrealistic approach.

So the adventure began Saturday before Christmas we were on an Egypt Air flight (less than two hours from Athens, ticket cost: $175 each)  from Athens bound for “Paris on the Nile”, as Cairo, Egypt was once known.

That same Khevide Isma’il (the one I introduced you to last week in the “palace” post) was so taken by Europe’s grand cities that he sought out a Parisean city planner, Baron Haussman, to lay the framework for this core district. It does have the feel of a European city’s layout.

With traffic circles and building facades, Cairo’s downtown definitely felt European but it also felt a bit crusty. Buildings are dirty and power-washing is long overdue. Smog from some eight million cars can do that to the best of buildings, I guess. While not the showstopper it could be with a bit of cleanup, we felt safe and comfortable everywhere we explored.


“Improving Egypt’s tourism sector depends on improving the view of the country’s domestic situation, as many countries believe that Egypt has no security or stability for the time being,” Elhamy el-Zayat, chairman of the Egyptian Tourism Federation, said last September in announcing a new marketing campaign. “The biggest challenge for Egypt is to shift this perspective, especially since Egypt is the heart of the Arab world, which has now become a source of news of violence in the world.” -


The bottom line is: we felt safe everywhere we went in Cairo, whether on foot, by taxi or by private transfer or tour.

Our Cairo Marriott Hotel’s location, on an island in the middle of the Nile River, put us in walking distance of the Egyptian Museum, Tahrir Square and the Cairo Tower. We used  taxis a couple of times to get to and from the downtown area, had a private car/driver/guide tour of the Pyramids, and arranged private transfers from the airport to hotel,and between the Marriott and the JWMarriott for our last night’s stay.


“I often get asked ‘is it safe to go to Egypt?’ and I say ‘a weekend in Paris isn’t exactly safe.’ . . . None of us can guarantee our safety on planet earth – it all has to be put into context.”  -- Professor Joanne Fletcher, BBC’s Chief Egyptologist, who has completed a four-part documentary on Egypt, now airing in England.

The Real Danger in Cairo

Frankly, the most danger we faced was in crossing the street. Cars don’t stop, nor are there pedestrian crossing lights.

Our Lonely Planet Egypt guidebook warned of the traffic and suggested that crossing a street with locals; having them act as a sort of buffer for you might be the best way to cross. “Never, ever hesitate or turn back once you’ve stepped off the sidewalk, and cross as if you own the road. But do it fast!” it advised.
That sounded reasonable, until put to the test. We set out for Tahrir Square and strolled from our hotel along the serene Nile River to a point it became necessary to cross six lanes of traffic.  Twice I stepped off the curb, took a step or two, then hastily retreated back to its safety when I saw the cars barreling towards us, four lanes from the left and two from the right. (Might I add The Scout, was becoming somewhat frustrated with me at that point.)

What happened next is an example of the warm and welcoming people we encountered in Cairo. As I was about to start whining, “I can’t do it!” a man hustled toward us through the traffic from across the street, and asked in perfect English, “Where do you want to go?” My rather lame answer, “Just across the street.” prompted him to motioned for us to follow him into the traffic – this time he stretched his arms in traffic guard fashion to slow the oncoming vehicles.  After he got us across the street he jogged back to his parked taxi where he’d apparently been watched our antics.


Tourism in Egypt has dropped from 17 million to 9 million,
according to Egypt’s Tourism Authority.

Our visit, the week before Christmas and during Prophet Mohammed’s December 23rd birthday holiday, usually ranks as the busiest tourist week of the year. But it wasn’t. Terrorism seems to have struck a harsh blow to the already dwindling number of visitors since Arab Spring. Even during this usually-busy week we found the ‘crowds’ sparce at key tourist attractions like the Pyramids and the famous Egyptian Museum. Good for us who enjoyed the space and freedom to roam, but definitely bad for Egypt’s economy. Those crowds, we’d read and heard about, simply were not there. The only large groups at the Pyramids and the Sphinx during our mid-morning weekday visit were bus loads of Egyptian school children.

And how glad were we as we photographed  from inches away King Tut's mask, stood transfixed at the Sphinx or stepped up onto the Pyramids that we hadn't let 'fear of possibility' keep us from visiting. How about you? Have you ever let the fear of possibility keep you from traveling somewhere?

You've told us that you want more about Cairo which is good because like Scheherazade, we do have more tales to tell. Hope you’ll be back for more of our adventures in this Land of the Pharaohs. . . 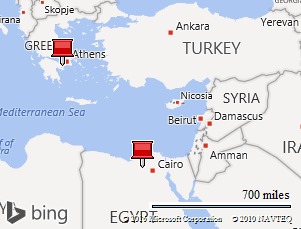 A big Happy New Year and wishes for great adventures and safe travels to you and yours in the coming year ~ Our sincere thanks for being with us in 2015! A big welcome to those who’ve just happened upon TravelnWrite for the first time. Hope you'll stop by often~

Linking this week with
Photo Friday

Posted by Jackie and Joel Smith at 7:10 AM