There are those among you who still are shaking your heads; trying to wrap them around the idea of anyone wanting to sail from Bangkok, Thailand to Istanbul,Turkey via the Middle East. It sounded to many like a route full of foreign ports with strange sounding names and in some cases undeveloped, perhaps even unsafe – at times -countries.

Not all our ports of call were like that.  Take, for example, Singapore. Our first port of call on this 34-day adventure is officially known as the Republic of Singapore, a Southeast Asian island country that is a sleek, modern sovereign city-state with a population of 5.4 million people. 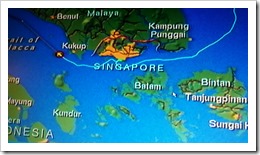 In terms of purchasing power parity, Singapore has the third-highest per capita income in the world. It is a major commercial hub, the fourth-biggest financial center and ranks second on the list of the world's busiest ports.

It also ranks high when comparing its education, healthcare and economy with other countries in the world.

We chose to explore this first port of call on our own.  For those of you who scoff at cruises because of those ‘cruise ship herd tours', let me assure you that Oceania Cruises gets a gold star for on-shore passenger flexibility. At all of our ports of call, those who wanted to take the ship-sponsored tours  could do so. Many arranged small independent group tours by use of the Cruise Critic web site in advance of the cruise. Others, like us,  just walked off the ship, planning to see the town on our own.


NOTE: Singapore is a tourist-friendly city, which makes it easy to tour on your own.  There were signs in English to explain the history of streets and neighborhoods and public art.

We opted to take the “Hop On, Hop Off” (HOHO) shore tour bus. We simply walked to the HOHO Bus tour desk in the very modern and cruise-ship-welcoming terminal. A short wait there and we were on their shuttle bus that transported us to the tour bus hub, tucked away among those towering buildings pictured above.

NOTE: Similar buses operate in numerous cities around the world – as their name implies you can hop off, explore a particular site and hop back on the next bus that comes along to get to the next site or stay on the bus and simply sightsee.

The open-air upper deck featured on Hop On, Hop Off buses is always a favorite with us. Sunglasses and sunscreen are musts in climates, like Singapore, where we were but a few miles north of the equator.

It was a good way to cover a lot of ground as we were docked in Singapore from 8 in the morning until 8 in the evening. Admittedly a single day in a port of call isn’t long enough, but it is a good sampler of all that a place has to offer. We use these stops as research – the overview can either bring us back on a future extended land trip or we can check it off as a ‘been there, done that’ sort of place.

In our case, we had been here before – decades ago.  So it was good to compare the old places that we recalled with that which was new. Trust me, there was much that was new! Our tour took us past the old British Colonial Raffles Hotel, (which had been old even way-back-when we first visited). The Singapore Sling, a gin and tropical fruit juice cocktail, was created in this place more than a hundred years ago. The stately old hotel was miniscule when compared to the towering Marina Bay Sands – yes, much has changed since we were last here.


We “hopped off” the the tour bus at this towering hospitality hub and rendezvoused with my former boss, now Superintendent of the American School there, and his wife.  We headed to the bar and restaurant at the very top – 57th floor. With a healthy fear of water and heights, the infinity pool that stretches some 150 meters across the rooftop Skypark didn’t call out to me – but it was spectacular.

﻿
Asians make up the largest segment of the population. About 75% are Chinese, yet there are significant populations of Malays, Indians and Eurasians.

With limited time we couldn’t visit every ethnic quarter so rode through Little India’s eateries and shops en route to Chinatown.

At its entry (and near the bus stop) we – like countless others – stopped to admire and photograph Sri Mariamman Temple, the oldest Hindu temple (opened 1827) in Singapore.

Then we wandered up and down the market streets visiting with vendors and shopping.


There were so many restaurants from which to choose in this colorful and lively quarter that one could easily eat every meal here for a week and never visit every eatery.

Our day too soon came to an end and we climbed back on to our Magic Carpet, aka Oceania’s Nautica. We’d have another day at sea before reaching our next port of call: Phuket Thailand. Watching sail away is one of our favorite parts of cruising – on this particular sailing it seemed the perfect time to sip a Singapore Sling ~

We know you are busy, so we appreciate the time you spend with us!  Safe travels to you and hope to see you back again soon as we head out through the Straits of Malacca for the Bay of Bengal. . . .