‘Twas the Season in Kalamata ~ The Olive Oil Season

Trees and buildings were decked out for Christmas, but it was the mountains of olives that gave a real seasonal feel to the place. Our mid-December arrival in The Mani put us smack dab in the middle of olive harvest and The Olive Oil Season.

The home we were there to purchase in Greece’s Peloponnese peninsula is an hour’s drive south of the city of Kalamata.

Seems everyone is familiar with the table variety called the “Kalamata olive”.
In this area of Greece the olive varietals are far more specific: a Myrtoya (hearty in areas of drought), Mavroya (early maturing), Kalamon (the classic table variety) and Mastoides (local oil variety of medium-sized with a pointy shape). That middle photo is one of our olives which I suspect is the Mastoides type.*

In everyday conversation around here olives are simply referred to as ‘oil’ or ‘salade’ varietals.

Olive oil is serious business in the Messinia region, with some 15 million trees producing 60,000 tons of oil annually.*  Oil storage containers are for sale far and wide. The photos above are of those for sale at our local supermarket.

By day, the olive groves that carpet this part of The Mani were alive with harvest activities. Many of the workers come from neighboring Albania; the country providing agricultural labor much as Mexican laborers do in the United States.  Messinia has some 300 olive presses and more than 40,000 are employed in the olive oil industry.*

While we love the idea of growing olives and producing olive oil we had no clue how it was done, we told our friend Giannis’ while dining at his taverna, just below our house on the hill. Turned out the olive press nearest us is owned and operated by his uncle, Takis.

So, Giannis encouraged us to stop by and visit the operation any time. . .

Unlike in America, where security would likely have stopped us at some distant gate, we walked into the production facility one Saturday night to find the place a beehive of activity: as one pickup load of olives was emptied another would pull up to unload.  The brain-rattling loud machinery didn’t make for conversation, but it did make for photo-taking.

It wasn’t until we were leaving that we met Takis.  I started to explain who we were and why we were there but he stopped me,

“But. . .of course, Giannis told me. You are the Americans. Come. Come with me where we can talk.”


He led us into a side room that served as a kitchen and break room with a small enclosed office in one corner. There he told us to sit and proceeded to pour us glasses of rose wine and cut thick slices of bread which he served smothered in olive oil .

“This is old oil,” he said as he handed us the plate.“It is three days old.” He then zipped back to the press room, leaving us alone to savor the taste and moment. That thick emerald green liquid was simply an elixir for the soul. Absolutely unmatched by any oil we’ve ever tasted in Tuscany or Spain or France . . .

We’d cleaned the plate and emptied our glasses by the time he returned. So the glasses were refilled and this time a large chunk of Feta cheese was put on the plate with two more slices of bread.  He took the plate into the press room, and returned with oil that was minutes old.

He then poured himeself a glass of wine, raised it toward us and said, “Welcome to my country! I hope you will be very happy here!”


“But. . .of course!” we thought, “We will be happy here. . .we already are!”
Note: Facts referenced with an asterik * in this post come from a report issued by the University of California’s Cooperative Extension Service in Sonoma County.  The map below shows the areas in Greece where olives are grown.  As always the time you’ve spent with us is appreciated.  Hope you’ll come back soon and until then Happy Travels. 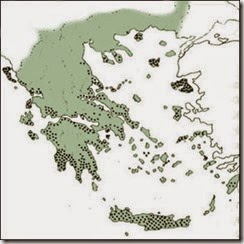 (Crete – that large island at the bottom of the map – in the 1990’s was producing 30% of Greece’s olive oil, followed by the Peloponnese, the land mass that looks like an open hand, at 26%.*)


This week we are linking up with the fine bloggers at:
Travel Photo Thursday – Budget Traveler’s Sandbox
Our World Tuesday

Posted by Jackie and Joel Smith at 7:50 AM