For the last month our weeks have started on a sweet note: Malasada Mondays ~ a lyrical combination that has brought smiles to our faces and – big sigh – added a few pounds to our weight.

Malasadas, a favorite treat in Hawaii, were introduced here in the late 1800’s by Portuguese laborers from Madeira and the Azores who came to work in the plantations.


Think donut holes – great BIG donut holes. Some served with a sugar coating and others sliced open and filled with melt-in-your-mouth custard. 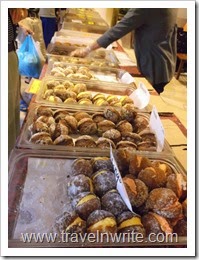 We’ve been lucky this year as our Hawaiian home at KoOlina has begun hosting one of the many Farmer’s Markets that take place throughout this island chain.

Although teeny in comparison to most, our market brings one Honolulu baker who serves up loaves of Hawaiian sweet bread and rolls filled with tropical flavors like coconut and pineapple. (He doesn’t have a retail outlet, but similar treats can be found at Leonard’s in Honolulu)

One of our favorite things about this one-time-kingdom-now-state in the middle of the Pacific Ocean is the diversity of people here and the customs and foods they’ve brought to this tropical paradise.

They came in the late 1800’s and early 1900’s as laborers to work in pineapple, taro, and sugar cane fields and related industries, from islands in the South Pacific, China, Korea, Japan, and Europe. Thanks to them bringing their foods and flavors from home, today’s Hawaii offers food lovers a feast of diverse culinary cuisine.


An editor of mine, many years ago asked, “Can you get American food there?” (Yes, he was serious. And yes, you can. Col. Sanders is serving up buckets of fried chicken while Quarter Pounders are being grilled under the Golden arches and Big Box pizza joints are making home deliveries.) But why would anyone come here to eat that food when there’s so many other 'Ono grinds' (good food)  just waiting to be sampled?

Some foods though just call out ‘Hawaiian’ in our minds. For instance, SPAM. That canned meat product is so popular here they have an annual SPAM Jam Festival! 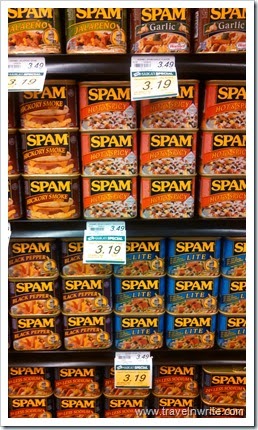 More SPAM®, according to one of the conference sponsors, is consumed per person in Hawaii than any other state in the United States, which makes it somewhat appropriate for their signature food festival, which in 2015 takes place May 2.

SPAM® stands for ‘spiced ham’; a product introduced in 1937 by the mainland  Hormel Foods Corporation.  The food cube inside the can is a mix of ham and pork shoulder and now comes in low-salt, spicy and original (simply salty) versions. It is believed to have been introduced by the service men stationed here during WWII.

Its popularity continues to grow. There seem to be new variations available each year! Costco, the big box U.S. chain store, sells it here by the case.

* in the decade since it began, the Waikiki SPAM® JAM, has become one of the most popular festivals in Hawaii. More than 20,000 attend the annual event.

My Hawaiian friends are offended if I compare a Hawaiian ‘shave ice’ to what we mainlanders call a ‘snow cone’. The premise is the same for both, shaved ice that is flavored with syrups of various flavors.  Apparently – it is the way the ice is shaved that can make this treat a true Hawaiian melt-in-your-mouth (pun intended!) version or a lumpy mainland version.  And a trip to the island of O’ahu isn’t complete without going to the North Shore for a stop at Matsumoto’s for shave ice.  Lines often wind into the street from the shave ice counter in this 1950’s wood-frame grocery store that now sells only shave ice, tee-shirts and souvenirs.

And one can’t make a trip to the North Shore and not be tempted by the eateries that line the two-lane road through Haleiwa (a once-laid-back-surfer-town now teeming with tourists) While these photos were taken in Haleiwa, you’ll find food trucks tucked away in the most unexpected places around the island:

When you travel do you stick to foods that you ‘know’ or do you ‘go local’? Tell us in the comments below or shoot us an email.  Thanks for the time you spent with us today ~ hope to see you again soon!  "Malamapono a hue hou" ~ Take care until we meet again!