The one ‘must do’ on my list for Australia was to sample its famous pie.

Not the fruity dessert variety we know in the United States, but the hearty, stick-to-your-ribs kind they make “Down Under” in both New Zealand and Australia. A dish so popular that Wikipedia claims that Australians, on average, consume 12 and New Zealanders, 15 annually. 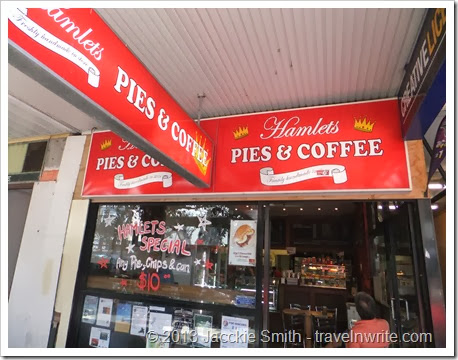 I had my pie and ate it, too at Hamlets Pies  a small storefront on the pedestrian Corso in Manly, a wonderful beachfront town just a short ferry ride from Sydney. (I’ll tell you more about this postcard perfect town in a future post but today’s focus is food and I don’t want to detract from this little shop that has been serving up pies for more than 25 years!) 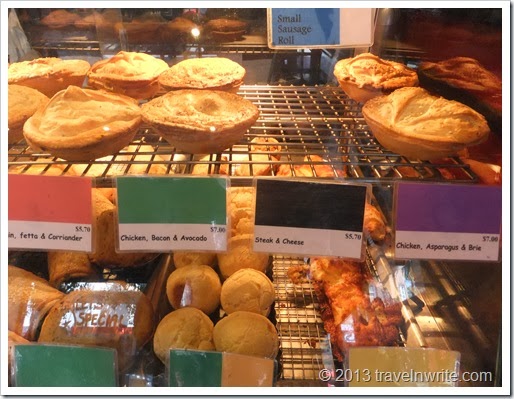 Similar to the United Kingdom’s meat pies, the Australian and New Zealand versions of the pie typically include a minced meat, gravy, onion, mushroom, cheese, potatoes and crust (I know, it sounds like starch and calories. . .it was, but sometimes you just have to seize the moment  ~ and all the calories that comes with it!) 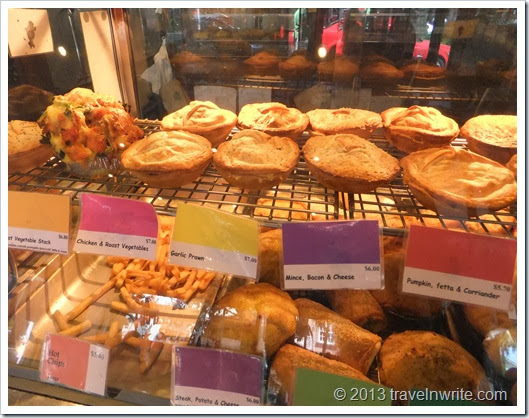 The pies are most often sold as take-away food so the shop had but a table or two for on-site dining.  A freezer case was filled with boxed pies and the display case filled with the fresh-baked, hand-made-on-site pies. 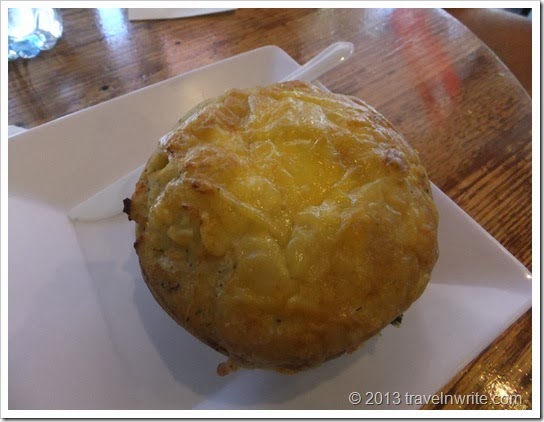 It was a beauty, this pie whose beginnings can be traced through history, beginning with the Egyptians, Greeks and Romans. Luckily we’d decided to share one as it was a hefty little fellow that satiated the hunger pangs for both of us.

The only disappointment was that we only ate one during our five-day stay. The good news is we have an Australian Pie Company back home in the Seattle suburb of Burien!  This eatery, which looks much like the one we visited in Manley, has been baking up pies since opening in May 1998.  I’ll be heading there to pick up some pies real soon!

In Manly, Australia: Hamlets Pie Company is located at 13 on The Corso.  You can find them on FB as well.

And for you Foodies who like to cook, here’s a link to a recipe for Australian Meat pie.
For more foodie news, head over to Inside Journeys where we are linking up today at Foodie Tuesday.
Posted by Jackie and Joel Smith at 7:47 AM