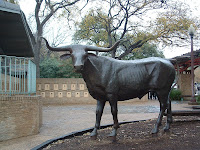 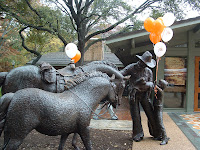 Texans are known as enthusiastic football fans. So much so that a book Friday Night Lights was written about their high school football mania and subsequently led to a television series in the U.S. We had our own taste of Lights Saturday night when the University of Texas at Austin Longhorns met the Nebraska Cornhuskers in their Big 12 championship game. As West Coast Pac-10 football fans we thought we knew football fan support . . .wrong!

The Texas Horns, as they are called, 'hooked 'em' in the final second of the game with a field goal. Score: 13-12. We were standing (three deep) as tables and booths were packed in Champions in the Courtyard by Marriott when the magic moment occurred. As the football passed through the uprights, I am sure seismologists thought it was an earthquake when a city-wide cheer swept through the area - with an epicenter in our cafe/bar.
We strolled through a very quiet campus Sunday morning and these two statues to the side of their enormous Royal-Texas Memorial Stadium caught our attention. One shows the longhorn as a calf being greeted by a young girl depicting the joy and learning ahead of them and at the opposite side of the courtyard is their mighty longhorn mascot.
Posted by Jackie and Joel Smith at 5:58 AM