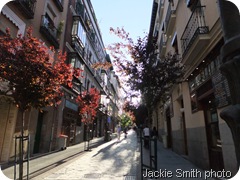 I’d spotted our elderly neighbor up on her tiny balcony, tending her many plants as we walked home to our Moratin Apartment. I waved but she obviously didn’t recognize us  – we’d only been neighbors for three days and hadn’t yet met.

A few minutes later when I stepped onto our balcony and called out in Spanish how beautiful her flowers were, she flashed a big smile and we ‘chatted’ a bit ( as much as one can do with my halting, slowly enunciated Spanish).

Then she picked something from one of her many pots and gestured it was for me.  Minutes later she was at our door, two stems of aromatic mint in hand.

She spoke far too rapidly about the herb for me to understand all she said, but as she handed it to me with another big smile and concluded, “hay muchas alegre”  - I couldn’t have agreed more.
Per the rental agreement we cleaned the apartment of all garbage the morning we left, but I couldn’t bring myself to toss the mint; I couldn’t toss the alegre. It represented the many kindnesses we experienced during our far-too-short-a-week in Madrid. 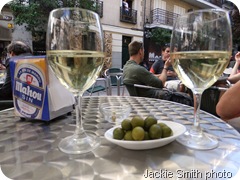 The first kindness we experienced was from a couple who’d stopped at the cerveceria we were at for a glass of wine before they headed to Saturday evening church services across the street.

In our halting Spanish we chatted with them – where we were from, where they were from. . .and as they left they told the bartender to pour two glasses of wine for us – on them.

Time and time again we were reminded that  travel opens the door to so many interesting places, but it really is the people you meet along the way that make those places memorable.

Note: We rented the Moratin Apartment from Spain Select, a company with properties in Seville, Valencia and Madrid.  The cost of our two-bedroom, one bath apartment was about 127-Euros a night – far less than hotel rates during this festival week we had chosen for our visit. We had to make a 250-Euro damage deposit which was promptly re-credited back to our account within the seven days after our stay, just as outlined in the rental agreement.
Posted by Jackie and Joel Smith at 8:58 AM