A gastronomic gallop through Portland

Food.
That's the real reason I want to return to Oregon's "City of Roses". 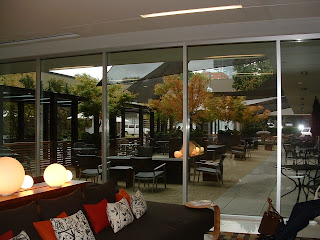 Lobby and courtyard Hotel Modera
Yes, its parks and gardens were great, shopping plentiful, and our Hotel Modera was heavenly, (a most memorable nightcap was sipped along side one of its three large fire pits in the courtyard) but it is the promise of continued culinary adventures that seem to be the strongest draw.

The Female Foursome did our best to sample as much as possible during our short stay with two notable highlights being:
* Higgins Restaurant and Bar, 1239 SW Broadway, a place that has grown so popular since its 1994 opening that I was glad the Portlander among us had made reservations at this French bistro-style restaurant housed in an atmospheric historic building complete with pressed tin ceilings.  I had one of Chef/owner Greg Higgins' pasta creations in a fresh basil pesto with hazelnuts. Hazelnuts, also known as filberts, are grown in Oregon and this rich, satisfying dish did credit to the crop and the chef's creativity.

* Mother's Bistro and Bar, 212 SW Stark, was our breakfast destination where the menu items featured Oregon's fresh blueberries and blackberries on or in muffins, pancakes and French toast. We walked from our hotel to justify eating another meal so soon after dinner at Higgins - an easy walk and great sightseeing. 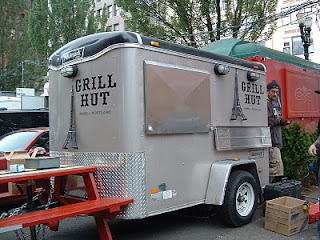 Morning set up at Food Carts
Our gastronomic gallop through the heart of the city took us to two of Portland's innovative Food Cart blocks.  I am talking city blocks filled with gourmet food offerings served from windows of trucks, vans and trailers - think taco truck, ice cream man, Oahu's Northshore shrimp trucks and you  get the idea.  Small sidewalk bistro tables and picnic tables make up the out-door dining areas.

Ethnic specialties, old-fashioned locally made Brats, ice cream - its all there somewhere.  High quality food for low prices and each eatery a popular stop. One place that had as many published food reviews on display as ayou might find in a restaurant; but then many of these places are the launching pads for chefs who aren't quite ready to make the plunge into traditional restaurant settings, we were told. 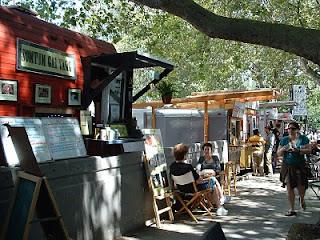 And then open for business
Clever names. Inventive food.  We stopped at The Dump Truck, open Monday - Friday 11 a.m. - 4 p.m., to try its gourmet steamed dumplings.  Dumplings, dump truck. . .get it? Ever thought of a bacon cheeseburger dumpling or one filled with Portobello mushrooms? They serve them here, where a hearty sampler plate can be had for $5.

Yes, I will go back but next time I'll slow the gastronomic gallop and simply forage through the food cart blocks. . .
Posted by Jackie and Joel Smith at 4:02 PM