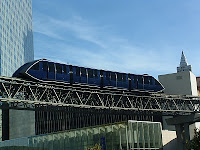 Developers of CityCenter, (the expansive 18 million square feet of development on 67 acres between the Bellagio and Monte Carlo on Las Vegas Blvd.) have drawn such rave reviews since it opened in mid-December that we considered staying here on our recent trip instead of the tried-and-true Wynn, at the other end of the Strip.
Instead, we opted to visit the development on a scouting expedition for 'next time'. While we prefer to try new places, sometimes it pays to visit a place first before committing to a stay. Such was the case with CityCenter.
Finding the tram from the Bellagio took us to the far reaches of the hotel into its convention meeting room wing - it is not a walk for everyone. Our return, walking along Las Vegas Blvd., seemed shorter. The tram - seeming as if it had arrived from the Jetsons television series -- deposited us at the stark, white Crystals station. (For those younger readers: George and Wilma Jetson, living far off in the future's 'outer space world' were the cartoon stars of an early 60's era television series).
Crystals, w 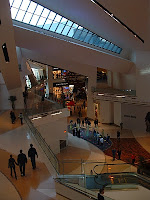 hile drawing rave architectural reviews, is an enormous multi-storied, angular enclave of jutting white walls, and vast open spaces and home to high-end stores. It is an area so vast and stark that glitzy storefronts seemed tucked away in its angles. We joked that at any moment, George or Wilma would emerge from behind one of the many big blank walls.
The Aria, with its 4,000 rooms and casino left us wondering again about the architectural accolaides this place is receiving. The long reservations desk put us in mind of train station counters in Eur 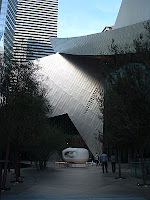 ope. The lobby was certainly not a place I would lounge while waiting for a flight as the 'couches' were rock benches with wooden backs, reminding one of the benches found in Washington's forests. And it felt like sitting on a rock with a wooden back. The casino, to the side of the lobby, was dark, with low ceilings, a stark contrast to the cavernous lobby.
As we discussed adjectives to use in this post, Joel commented, "If I were designing purgatory, I would start here." Admittedly the development only opened a few weeks ago, and perhaps there are plans to soften the stark walls of Crystals and hopefully fill it with a bit more activity and sense of life. And web photos of the rooms in Aria make them appear quite comfortable - but I am not sure we will be rushing to find out at any time in the near future.